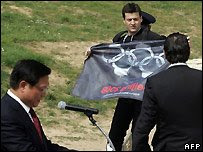 Three Reporters Without Borders representatives, including secretary-general Robert Ménard, today unfurled a banner showing the Olympic rings transformed into handcuffs at the official Olympic torch-lighting ceremony in Olympia, in Greece. Security forces arrested the three human rights activists, who are now being held at a police station in Pyrgos, around 80 kilometers from Olympia.

“The Olympic flame may be sacred but human rights are even more so,” the press freedom organisation said. “We could not let the Chinese government take the Olympic flame, a symbol of peace, without denouncing the dramatic human rights situation in China with less than five months to go to the start of the Olympic Games.”

Reporters Without Borders added : “The treatment reserved in China for those who express themselves freely, the censorship imposed on the press and the news blackout in Tibet demand this sort of protest. All possible means must now be used to condemn the serious violations of basic freedoms in China. We will protest whenever we can.”

The Reporters Without Borders’ representatives unfurled the Beijing 2008 campaign banner during the ceremony to light the torch. They were immediately seized by the security forces before being taken to a police station in Pyrgos.

“What we did was not intended to embarrass the Greek authorities,” the organisation said. “We just want to remind the Chinese government and the International Olympic Committee of the promises made on respecting human rights in China”.

Chinese television interrupted its coverage of the ceremony during the intervention by Reporters Without Borders’ activists, replacing it with archive footage of the Olympic site. Greek television simply broke off its broadcast for a few moments.

Reporters Without Borders is also calling on heads of state, heads of government and members of royal families to boycott the 8 August opening ceremony of the Beijing games.

The organisation will hold a news conference on the press freedom situation in China at 11 a.m. on 27 March at the Lawyers Centre in Athens.

Around 100 journalists, Internet users and cyber-dissidents are currently imprisoned in China just for expressing their views peacefully. Journalists have been banned from visiting Tibet since 12 March and have been expelled from neighbouring provinces. The crackdown on protests by Tibetans is taking place out of sight.

Chinese journalists continue to be subject to the dictates of the Publicity Department (the former Propaganda Department), which imposes censorship on a wide range of subjects. The government and party continue to control news and information and have authoritarian laws to punish violators.

Charges of subversion, disseminating state secrets or spying are often brought against journalists and cyber-dissidents. Self-censorship is the rule in news organisations. Independent Chinese-language media based abroad are blocked, harassed or jammed, preventing the emergence of diversity in news and information.