Smoke gets in their eyes 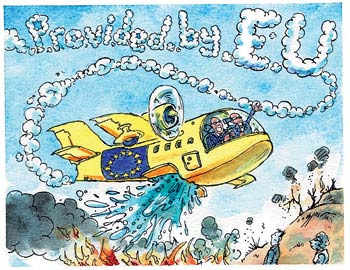 EVERYBODY loves a fireman, especially those saviours from the sky who swoop down in yellow-painted Canadair planes and “bomb” fires with six tonnes of water in a single swoop. Not everybody, it is fair to say, loves the European Union. So it is little wonder that every summer, as forest fires crackle and roar across southern Europe, politicians suggest Brussels should make itself more popular by creating an EU fleet of such planes.

Given that the most sought-after models, made by Bombardier of Canada, cost more than €19m ($26m) a pop, it is argued that such precious assets should be shared. Better still, they should be painted with the blue-and-gold European flag so that grateful citizens can see who is zooming to their aid. A 2006 report for the European Commission—warmly welcomed by the European Parliament—argued for the creation of a new civil-protection force, dubbed “EuropeAid”. It suggested buying ten new water bombers as the minimum needed to form a “credible” Euro-squadron (though whether they should be paid for by EU funds or national governments was left unclear).

The author of that report, a former French foreign minister, Michel Barnier, has been at it again. While inspecting fire precautions in southern France on July 26th, in his new capacity as his country's agriculture minister, Mr Barnier renewed his call for a “EuropeAid” force. His boss, the French president, Nicolas Sarkozy, discussed creating “some sort of European fleet” of jointly owned fire planes during a working lunch with the Greek prime minister, Costas Karamanlis. The EU environment commissioner, Stavros Dimas (whose officials would control such a fleet), unsurprisingly found the plan “very encouraging”.

In the face of yearly devastation—only this week, fire damaged a third of the forest cover on the two largest Canary Islands, forcing the evacuation of 14,000 people—the Canadairs offer impressive proof to voters that the authorities are taking the disasters in hand. Specially toughened boat planes, they can attack fires up to nine times an hour, skimming across a nearby lake or sea to fill their tanks in seconds. (According to a popular tale, a Canadair once sucked up a diver by mistake and dropped him, flippers sadly waving, onto a fire. Not true: the water intakes are only inches wide.)

Mr Barnier's report does not conceal the political dimension, saying it is “essential” to make EU assistance more visible. It says there should be a single Euro-uniform worn by “all staff acting as part of the European force”, emblazoned with the EU flag, the flag of the wearer's country and the words “EuropeAid”.

European politicians should resist such temptations. Their ability to do so will say much about whether the EU puts action above spin. There is every sense in helping nations share expensive assets to confront menaces such as forest fires. But the union is already doing just that. The commission runs an excellent unit called the Monitoring and Information Centre (MIC), swiftly linking countries that need emergency equipment with European governments that have planes to lend. Another unsung commission unit, EFFIS, sends out daily forest-fire risk assessments, based on weather forecasts and the like.

There is no reason to suppose that a joint EU squadron would work better. One EU official admits it would be politically “difficult” to decide where to send planes when fires are raging in several countries. Even Canada, a single state, merely encourages provincial governments to share water bombers; it does not direct their movements. As David Martell, a University of Toronto academic, notes: “There is no way political leaders in one jurisdiction are going to allow themselves to be dictated to by somebody else” at such times.

Forestry experts in bodies such as the Food and Agriculture Organisation (FAO) show surprisingly little yearning for big sums to be devoted to water bombers. European governments have spent hugely on new equipment in recent years. Bombardier's records show that there are already 76 Canadairs in service in EU nations, including 36 of the latest type (a 37th crashed in Greece last month, killing its crew). Money might now be better spent on fire prevention. Although the overall area of land burned each season is in decline because of better fire-fighting equipment, the number of blazes in EU forests keeps rising.

The poor shepherd
Researchers point to several reasons, few of which can be resolved by water-bombing. Important factors include rural depopulation, growing wealth, arson and stupidity. Once people can afford gas cookers, and stop herding goats, firewood gets left on the ground and flammable scrub is left uncleared. The last, elderly shepherds start fires to clear thorny scrub and to promote green-shoot growth, “but they lack the physical strength or the manpower to control a fire, and it gets out of hand,” says Pieter Van Lierop, a forest-fires expert at the FAO. Climate change plays a role, and so do dimwits (cigarette butts start many fires).

Governments talk a lot about arson, especially by property speculators trying to build on forest land. Many Mediterranean states have laws against building on burned forest land (under a 2006 Spanish law, land use cannot be changed for 30 years after a forest fire). Corruption, and weak or clogged legal systems, can undermine such rules, of course. Part-time firemen sometimes set fires to generate work for themselves, a new FAO report notes. A local forest ranger is being held in the Canary Islands, accused of just that. But the FAO also suggests that loud talk of arson can be cover for government “ineffectiveness”.

Forestry experts favour rather mundane solutions, like education, making firebreaks and hiring ground crews with spades and hoes. That may please the crowds less than EU-flagged planes piloted by heroes in blue and gold flightsuits. But if politicians want to be loved, they should have chosen another trade: being a fireman, perhaps?