Three months ago, about half a year late but moving fast, the eurozone and the International Monetary Fund punted €130bn ($165bn, £107bn) on averting default in Greece. The first-quarter results are in, and the management is performing pretty well. But the country needs to grow as well as cut costs, and sales are not looking great.

The most likely outcome by far is still that Greece will have to reduce the net present value of its debt in a restructuring, probably some time next year. In the meantime, oddly enough, the best courseis to keep going and pretend it won’t happen.

The European Union and IMF’s first review of the programme said that the fiscal conditions were largely on track. Greece is attempting a pretty much unprecedented tightening equivalent to around 16 percentage points of gross domestic product in a few years, and it has at least gone off in the right direction.

George Papandreou’s government, which inherited this shambles from its incompetent and mendacious predecessor, has managed to proceed without meeting impassable political opposition. Strikes and protests, yes; outright chaos and a collapse of public order; no, or not yet.

Sorting out an inherited mess can create a powerful political narrative of recovery and redemption, no matter how unpleasant the policies that have to be followed. For an object lesson in how a centre-left government can turn fiscal stringency into political gain, Mr Papandreou could look across the Atlantic to President Luiz Inácio Lula da Silva in Brazil. A president who entered office amid panicked fears of an imminent government bankruptcy is just about to leave it luxuriating in a once unimaginable glow of popularity.

When Mr da Silva was elected in 2002, Brazil had already been given a $30bn loan, the largest ever in the IMF’s history, in an attempt to turn round an alarmingly destructive downward spiral of confidence in the debt markets. Mr da Silva assumed power, ignored siren calls to announce immediate default and adopted a wincingly tight target for the primary fiscal surplus of 4.25 per cent of GDP, even tougher than the one the fund was asking for. Confidence came back and any realistic prospect of default was gone in a year. 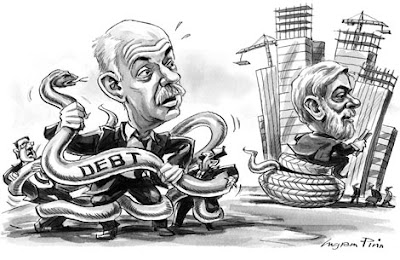 The subsequent eight years – which, to be fair, built on work started by the preceding government of Fernando Henrique Cardoso – constituted a rare successful run for social democracy in Latin America. Fiscal orthodoxy, steady growth, poverty alleviation through employment and the Bolsa Família system of welfare benefits: all are extremely useful exemplars in a region where the alternative leftist model is the thuggish populism of Hugo Chávez. (Whether Brazil can continue to resist such allure now it has its own oil remains to be seen.)

Western Europe could badly use a similar case of social democracy done properly. Sadly, the odds remain heavily against Athens following Brasília. Mr Papandreou’s good start should not conceal the fact that even successful fiscal adjustment will leave a debt burden approaching 150 per cent of GDP and he needs to punch a huge hole in the economy while achieving economic growth at the same time. Growth has come in weaker than expected so far.

Greece is trying to effect this shift in an international environment of reluctant consumers and fearful investors. Brazil had the benefit of selling into a strongly recovering world economy and rising commodity prices. Uncompetitive Greece, with low productivity and high unit costs, disastrously locked into the euro, is trying to sell into a stuttering global recovery.

Investors remain sceptical about the ability to get grounded economies airborne in this heavy atmosphere. Ireland, to the applause of the hair-shirt-and-cold-shower school, has embarked on an IMF austerity programme without the IMF. Yet its debt continues to trade at spreads of more than 300 basis points over Germany’s. The markets, while they continue to shovel very cheap money at governments like the US, Germany and, perhaps surprisingly, the UK, are marking down more troubled countries heavily. Greek spreads are now back above 800 basis points over Germany’s, around their level just after the bail-out.

In any case, whatever Mr Papandreou’s administration can do with the central government finances, much of the problem lies at local government and other sub-national levels. In order for Greece to meet its fiscal targets for the first review, the national government had to be particularly stringent to make up for profligacy at local levels.

Does this mean Greece should just give up and default now? The answer is probably not, for two reasons. First, restructuring debt to lower its net present value today would achieve one thing: relieving the debt service pressure on the country’s finances. But it would still leave Greece adding to its debt with its current deficit, and it would do nothing to address the country’s fundamental problem with uncompetitiveness. As well as the fiscal targets, the IMF and EU programme contains detailed pledges on opening up closed professions, liberalising transport and energy industries, auditing and reducing losses in state-owned enterprises, changing jobs legislation and so forth. Greece will need to take these actions anyway, default or not, if it is to regain its competitiveness. Though the record of countries complying with IMF conditions is not stellar, the added weight of the EU means these are more likely to happen under a rescue programme than not.

Second, given eurozone banks’ holdings of Greek debt, a default would turn Europe’s sovereign debt problem back into a banking crisis, opening a new round of the ghoulishly entertaining game of pass-the-parcel between private and public balance sheets. The best solution for Greece at the moment is to push on and get as much done as it can, while the money from the IMF/EU programme shields it from the judgment of the markets. Restructuring is more likely to make sense in a year or so, assuming that the budget is definitively heading into surplus. Market gurus say this is what most investors are expecting in any case. Politically, unburdening itself of debt can then be portrayed as ridding Greece of a dysfunctional past.

In the meantime, the rest of Europe can get on with building a firebreak. Portugal and Spain can pursue austerity. The banks holding Greek debt can either seek to offload it, or raise enough capital to insulate themselves against a restructuring. The 2001 sovereign default of Argentina, Brazil’s dysfunctional neighbour, had been so long prefigured that investors had been able to prepare.

Should Greece restructure? Very likely, but not yet. Painful though it is, struggling under a debt burden and an IMF programme has some advantages, and Mr Papandreou’s government needs to seize them.