Riots in Greece: A young generation under pressure?

During the last four days analysts, politicians, journalists, parents and even we, young workers aged 25 to 35, try to understand the reasons behind the wave of street protests and violence, which is shaking our country. 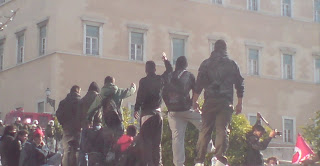 A Young Generation under pressure? photo by G700

The shooting of a 16 year old boy, Alexis Grigoropoulos, by a police officer on Saturday evening, is in itself a poor excuse for a five day burning and looting in the city of Athens, not to mention the expansion of protests outside the capital.

So, why is the flame of protest both civil as well as uncivil still lit? 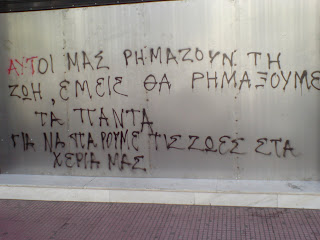 Well, partly out of police incompetence. Partly because the anarchists want it. Partly because certain political organizations of the Left and the extreme left provoke it, aiming to reap electoral benefits from the fuss. Partly because people with different profiles, school gangs, economic immigrants, disadvantaged poor and junkies, participate in it willingly, as it is always better to get a new pair of sunglasses and a mobile phone for free than having to pay for it.

Not disregarding the validity of the above explanations, we consider them to be rather superficial.

There is a bigger problem in today.

It is time we dug a bit deeper into our collective soul and examined the post junta Greek society, democracy and culture in order to understand why this revolt is taking place.

If we did, we would see that the December riots are due to a set of complicated and interconnected social and cultural reasons, simplistic police-competency focused analysis as well as left wing conspiracy theories cannot grasp to the full.

Let us begin with the basic stuff: state incompetence. It is not only the police who lack a consistent policy, are unorganized with no appropriate operation plans and raided by corruption and nepotism. It is also the conservative government, which like most Greek governments in the past, apart form failing on the operational front, it has also allowed for the growth of a violent youth subculture, which makes its presence felt not only in Eksarxeia, but even more so in schools and universities, football fields, basketball arenas, outside on the streets when driving. If we take into consideration the complete absence of sanctions when people get arrested for violence and hooliganism, it is easy to see how the Greek state has traditionally being rewarding this aggressive behavior among young people. It is fun and free of cost “na ta spame”, to break everything up. 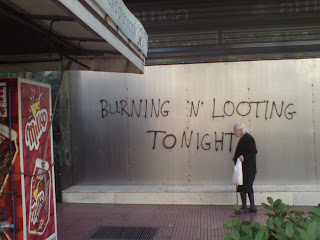 The above reality has led many people to believe that the 3rd Greek Republic has an entrenched culture of civil disobedience. As Yale professor Stathis Kalyvas argued, these riots are a symptom of a deep cultural problem. Since 1974 and the transition to democracy in Greece, civil disobedience has been seen as "almost always justified."

Indeed, civil disobedience has proven to be extremely resistant in time, resulting to what can be called a heroic youth culture of demonstrations and violent protests, where young people and especially students try to imitate the days of the Polytechneio revolt against the junta.

But is this the case today? Not really!

To argue that the December protests are exclusively a symptom of such a cultural phenomenon, therefore accepting that what we are really confronting is the usual revolutionary folklore, is like driving in LA with map of New York.

What Greece is experiencing at the moment is a serious young people problem.

Young Greeks, even those up to the age of 35, make up a silent majority of overworked, underpaid, debt ridden and insecure citizens. Even worse they see no future, because they feel the economic mobility ladder has broken.

Two years ago we came up with the term “generation 700 euros”, after the Greek minimum wage, so as to symbolize the job market frustration experienced by young Greeks, including ourselves, who come face to face with hostile working conditions, limited work potential and poor wages.

For those who want to get a job, unemployment is a vicious condition any way you look at it, and Greece is a textbook case of a permanent lack of jobs at every level of the economy, including the supposedly higher echelons with the good pay package.

The facts speak for themselves. According to OECD and Eurostat, unemployment within the age cohort of 19-24 has never fallen below 22% since 1983. Today it stands at 22.3%. Equally speaking it has never fallen below 10% for the ages 25-34. Today it stands at 10.3%. According to a recent survey contacted by the Educational Institute 64,4% of graduates aged 25 earn less than 750 euros per month. According to the National Statistics Agency (ESYE) 56% of workers up to the age of 30 get paid up to 700 euros per month.

Added to all these, if we take into account the lack of quality collective goods, the huge public debt, the gigantic social security liabilities and the environmental deficit that Greece, and especially Athens, is facing today, we would come up with the equivalent of the ingredients of a Molotov bomb.

Rightly so, young people today feel they are rapidly becoming the lost generation of . Their parents were the baby boomers. They are now facing the danger of becoming baby losers. The generational gap is widening as the 114 and Polytechneio generations keep on transferring the bill of the post-junta consumerist society to the young and future citizens. By protesting and striking young people voice this very concern too. "Not only for Alex, but because we won't take it any more" many students say.

Having said that, sooner than expected young teenagers of the millennium generation and we, the young workers of generation 700 euros, will need to start looking for practical solutions to our problems.

Solutions! Now that’s where the real problem starts. As politicians usually say when they want to justify their inactivity “there are no magical solutions”. Of course! There are no easy fixes. Solutions do exist though. They are to be found in fighting the ills of the Greek economy: crony capitalism, public sector inefficiency, nepotism, public finances that are in a state of insolvency, labor market “rigid-anomy”, lack of opportunities and funds in the beginning of young people’s working lives, narrow production base, low skill economy, gerontocracy, inefficient education system. It ain’t a small task. But these are the strategic policy areas that a New Deal for the Young and the rest of the country needs to address immediately. Fixing those problems is the only way to restore social and integernerational justice in the country, and advance into a new era of sustainable prosperity. This is what we should be fighting for today. Young Greeks must win peacefully the future we deserve.