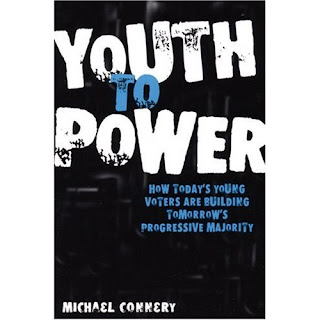 Youth to Power: How Today's Young Voters Are Building Tomorrow's Progressive Majority examines how today's young people are combining technology with a vigorous social spirit to revive progressive politics. In addition to recounting the history of youth politics since its emergence in the 1972 election, as well as showing where the movement still lags behind its more organized conservative counterpart, the book features interviews with many of the major figures in the youth political movement, and identifies strategies that the Democratic Party can use to capitalize on its new advantages with young voters. Youth to Power is a must-read for anyone who wants to understand the political and cultural future of America.

Excerpts from the book

from Chapter 4: The [dot]org Boom

It is probably difficult for a young person getting involved in politics today to imagine that just five years ago, a growing progressive youth movement did not exist. Time travel back to 2003,and youth involvement in progressive politics typically meant lick-ing stamps and phone-banking for a campaign, working twelve hour days canvassing street corners for an operation like the Fund for Public Interest Research, or, if you were lucky enough to have wealthy and generous parents, taking on an unpaid internship in Washington D.C. Today, while there are still economic and geo-graphic barriers to taking full advantage of the new infrastructure,if someone is motivated enough, it is easy to find multiple opportunities in progressive youth politics.

For those who are less traditionally inclined and not looking to join a “political” group,there are organizations like Head Count that specialize in cultural outreach, and social clubs like Drinking Liberally. And for those who are looking to hop on the career track, opportunities in progressive politics are no longer limited to joining the blue blazer crowd jockeying for insider jobs in Washington.

This change in the culture of progressive youth politics is the result of a dramatic five-year shift in how young voters relate to both the Democratic Party and the progressive movement as a whole. This shift did not come out of nowhere, but is the end result of the work of thousands of activists, insiders and regular people—so-called “social entrepreneurs”—who have reshaped what it means to participate in progressive politics. Tired of the Democrats lying down before the Republicans on issue after issue,and seeing no real leadership among traditional political youth groups, these individuals worked to build their own progressive countermovement, in the process creating what is know as the “[dot] Org Boom,” an explosion of organizations founded by and for young people.

This boom can be broken down into three distinct stages. The initial phase began in 2003 and lasted through the 2004 election and was characterized by outsiders crashing the political gates (a parallel movement to what was happening at the time in the blogosphere), an embrace of peer-to-peer outreach tactics, and a desire to make political engagement culturally relevant to a new generation of voters.

The second phase, lasting from 2005 to 2006, was a mini-bust followed by a regrouping. During this phase, many organizations that had helped launch the initial movement faded away,either due to the disappointing conclusion to the 2004 election or the withdrawal of funds by donors looking to reassess their investments. This second phase was also marked by the increasing professionalization of the movement through the influx of DC insiders and organizations and a divvying up of the movement into various “sectors” that mirrored progressive funding analyses of the conservative movement.

Today, deep into the 2008 campaign cycle, we are entering the third phase of the [dot] Org Boom. What will emerge as the defining characteristics of this stage are still largely undefined, though it is likely to be marked by increasing localization and the adoption of new technologies. These trends can already be seen in the growth of state-based youth organizations, the formation of Students for Barack Obama, which rose to prominence through its use of FaceBook to grow a student army for Senator Obama’s presidential campaign, and in the changing giving patterns of major donors, who will have an outsized influence on how this third phase unfolds.

Michael Connery has written a spirited and savvy guide to the "Millennial" generation that is reshaping progressive youth politics. If you want to understand the ideas, action, spirit and people building the progressive majority of our future— read this book!